In order to get the most out of personal Bible study, try using a form like this one: 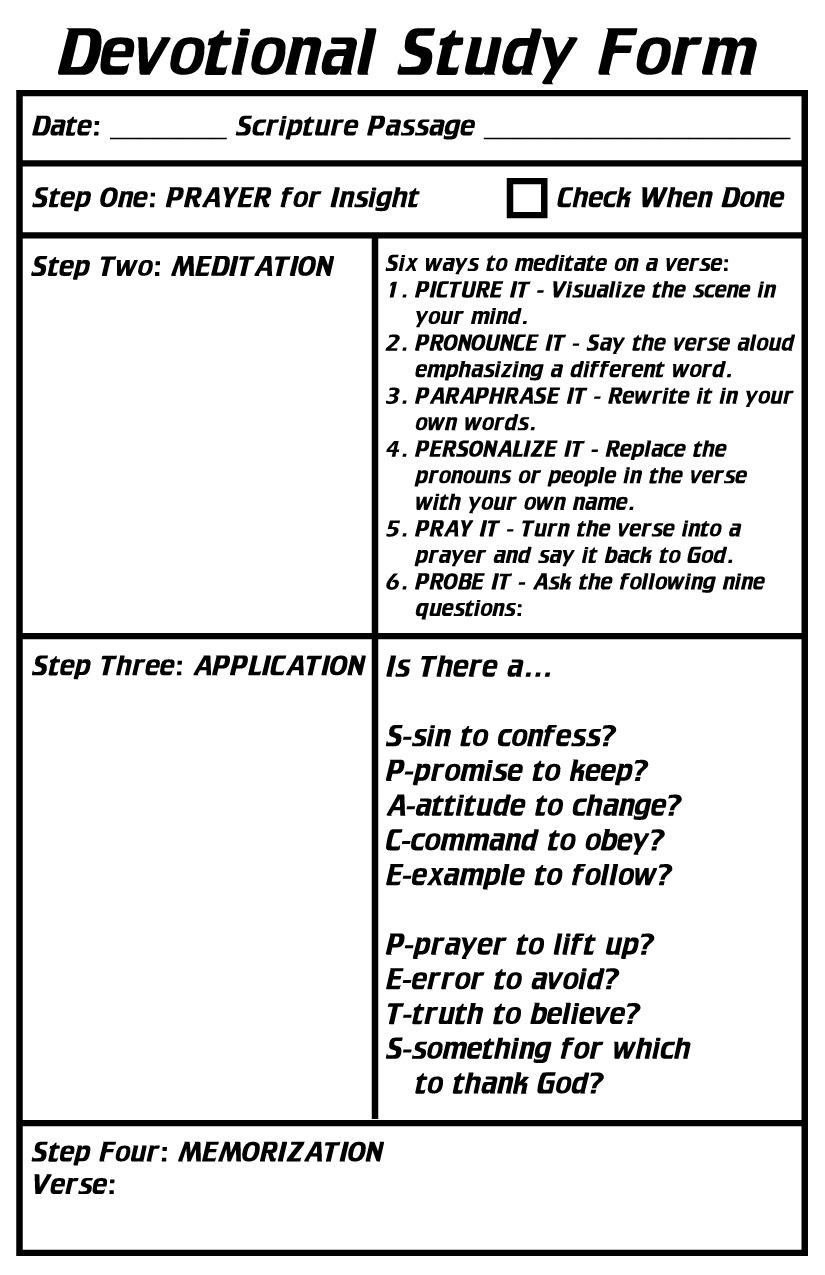 Reading the above is like a flashback from the old Masterlife days; very similar…

Prayer is often misunderstood. It is more connecting with God than it is a formula for getting answers or even stuff from God. Sometimes we think that God is like a genie waiting to grant our wishes if only we would ask Him. The fact is that the more we get to know God, the more our prayers are changed. We ask differently when we begin to realize the sacrifice of Christ. When we go through the pit with Christ, that experience changes our prayer life. Oswald Chambers once wrote something like, prayer is God’s avenue of change in us. When we pray, God will change our hearts and will often use us to bring about a solution or an answer to our prayers.

Prayer is not a means to an end. In so many ways, it is the end itself. — Beth Moore

Prayer lays hold of God’s plan and becomes the link between His will and its accomplishment on earth. Amazing things happen, and we are given the privilege of being the channels of the Holy Spirit’s prayer. — Elizabeth Elliot

Work, work, from morning until late at night. In fact, I have so much to do that I shall have to spend the first three hours in prayer. — Martin Luther

Top 10 Steps to Connecting in Prayer:

It’s probably a verse you have come to know over the course of your Christian life. We quote it around Mother’s Day and Father’s Day and use it to remind parents of their responsibility to raise godly children; it does not happen just because we take our kids to church.

Train a child in the way he should go, and when he is old he will not depart from it. – Proverbs 22:6

For the parents of the apostle Paul, these were not simply words of a short verse worth memorizing; they were the foundation of family life. In a Jewish home, it was not the job of the mother to teach spiritual things to the kids, it was the father’s responsibility, who learned it from his own father.

Philippians 3:5 tells us a bit of Paul’s early childhood: circumcised on the eighth day, a part of the children of Israel, the tribe of Benjamin, and even a “Hebrew of Hebrews.” The readers understood that Paul meant nothing but Jewish influence surrounded him in those early years.

The Code of Jewish Law states that “it is the duty of every father to train his children in the practice of all the precepts, whether biblical or rabbinical” and “to guard his children against any forbidden act.” Paul’s father took this responsibility very seriously.

Looking back through New Testament eyes, we tend to put Pharisees in a negative light, since Jesus had so much conflict with them and they ultimately schemed the crucifixion of Christ, but in the first century the Pharisees held a position of great honor. I wonder if Paul spoke from experience when he penned the words to the Ephesian church that fathers must not exasperate their children, but bring them up in the training and instruction of the Lord (Ephesians 6:4).

The Jewish historian Josephus (under contract with the Roman Empire) wrote the Jews lay greater stress on the training of children than on anything else; as one of the most important duties.

Being a Hebrew was not just about religion, or a way of life, but it defined who you were, how you thought and how you felt about life. It affected how you dressed (even the wearing of phylacteries – Exodus 13:9) to what you celebrated (the regular ritual and feasts).

So men, has there been a time in your life when you delegated the task of spiritual instruction to your wife, thinking that religious stuff was for women, or raising the kids is primarily woman’s work? I challenge you to make sure you rethink that position and learn from the life of Paul that religious instruction is the father’s role in the family. There is a phrase that should haunt each of us, “Like father, like son.”

While I don’t want to discount a miracle of God working in our kids lives, but how can we expect our children to mysteriously be right with God one day, or stand up for godly principles, if we ourselves are not right with God? We must model what a relationship with God is all about and train our kids in the way they should go. They might choose another path later on, but it won’t be for a lack of instruction on the father’s part when they were young.

So, what do you need to do to better model what a relationship with Jesus is all about? How well do you know the Bible and the teachings of Christ? Can you pass on the stories and teachings at appropriate times throughout the day, helping your kids know that Christianity is not just something we do on Sundays? Can you quote Scripture in front of your kids, and challenge them to memorize verses as well? How can you relate the teaching of the Bible to the struggles and situations in their daily lives? Have you set up a time each day to read Scripture, a devotional thought and pray? It’s never too late to get on the right path.