This is the fourth of six lessons in the God’s Not Dead series:

Evidence from physics and astronomy point to a creator, but biology is a bit more challenging to reconcile with Christianity. Why?

The triumph of the theory of evolution is usually the knockout blow to anyone attempting to maintain an intellectually credible belief in God. But evidence over the past few decades has also seen the fingerprints of God.

Anthony Flew’s There is a God: how the world’s most notorious atheist changed his mind. He was an atheistic philosopher who came to doubt atheism as a result of advances in molecular biology, particularly DNA. Dr. Flew was impacted by the amount of complexity in DNA that could only point to an intelligent designer. 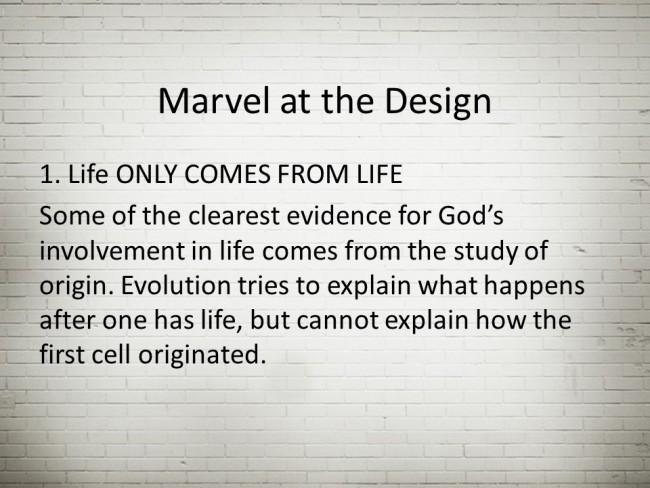 Spontaneous formation of a living cell, the odds are 1 in 1o to the 40,000 power. Those zeros could fill a book. Similar chances could be compared to a tornado moving through a junkyard and assembling a fully operational 747.

Not surprising, scientists would never say a cell could have originated by chance, instead they say that somehow the laws of nature could have spontaneously brought together the different building blocks to form the first cell. But we all can observe that nature does the exact opposite: 1) Nature moves from order to disorder: try keeping your house clean, it naturally becomes messy. 2) Nature moves from high energy to low energy: water always runs downhill, never uphill.

A cell is both highly ordered and contains very high energy compared to its separate building blocks. For a cell to come together, it must behave in the opposite direction of its normal course.

Last ditch effort: the sun could have supplied the energy in order to create that first cell, but that is like setting off a stick of dynamite and expecting the energy to create a house. A final ditch effort: life on Earth was seeded by aliens. (ancient astronaut theory). 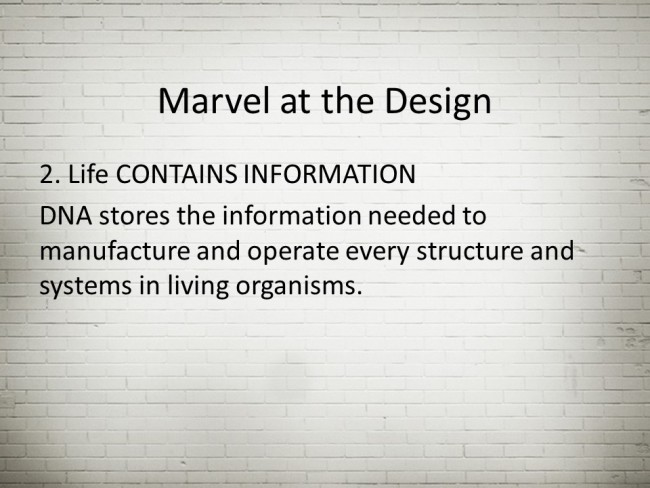 It has been concluded that the more biologists decipher the DNA code, the more they are recognizing its complexity and ingenuity, which is vastly more sophisticated than computer software. Letters in DNA are arranged in very specific sequences to provide the needed information to construct and operate a living organism. So, for nature to blindly produce enough information for even a single gene would be much like a student sitting on their cell phone and accidentally pocket texting the message, “Don’t tell anyone, but I cheated on the test.” Like the letters from a pocket text, it can only come from an intelligent agent.

Imagine a pot of boiling alphabet soup and noticing the sequence of letters to form the sentence, “I hope you feel better soon, and have a nice day.” You CANNOT assume that this happened due to a chemical reaction or the physics of the water and pasta. It can only be explained by intelligence.

This video addresses genetic code and mutations over time… 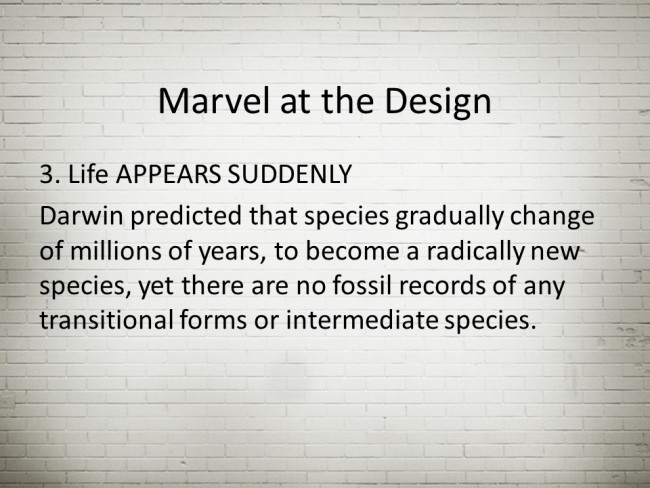 Some Christians, like Dr. Francis Collins, who mapped the human genome, actually argue that Christianity and evolution are compatible. Evolution being the tool that God used to create humanity in his image, but unguided evolutionary process cannot explain the sudden appearance of the fossil record of complex life.

Collins actually addresses ID in his book, the Language of God.

Scientific Objection to ID: is it because scientists bow down at the altar of Darwin? But scientists are attracted to overturning accepted theories.

The fossil record does not show life gradually changing over time. It seems that major groups like vertebrates appear suddenly in what is called the Cambrian explosion, which is the most dramatic of a general pattern in the fossil record. The first new types like fish or reptiles typically appear suddenly without a series of identifiable ancestors. THEN, after they appear, they never change significantly.

At a conference at the University of Washington, Dr. J. Y. Chen writes about Chinese scientists who differ from Darwin and question Darwinian evolution. When asked to clarify, he said, “In China we can criticize Darwin, but not the government. In America, you can criticize the government, but not Darwin.”

I showed a clip of Ken Ham addressing the design of creation. [ Go ] Also he addresses the question, Is there really a God?

Ken Ham mentioned about atheists spending so much time and effort declaring there is no God, why do they even care? If we cease to exist, no purpose, no meaning, dead and decaying, and no one remembers or cares after we are gone, WHO CARES?

As an example, the eye demonstrates incredible levels of sophistication for the single purpose of vision. To see properly, countess individual pieces have to be properly arranged and come together perfectly… lens, cornea, iris, retina, nerve cord connecting to the proper part of the brain. The whole system would fall apart and not work if all this is not wired up correctly.

This is the illustration for irreducible complexity; biological structures that are composed of many parts. Such structures cannot come together part by part because if all the parts are not present, nothing works. Which part of a mouse trap can you remove and the trap still work?

This is another evidence of a predetermined design of an intelligent designer. 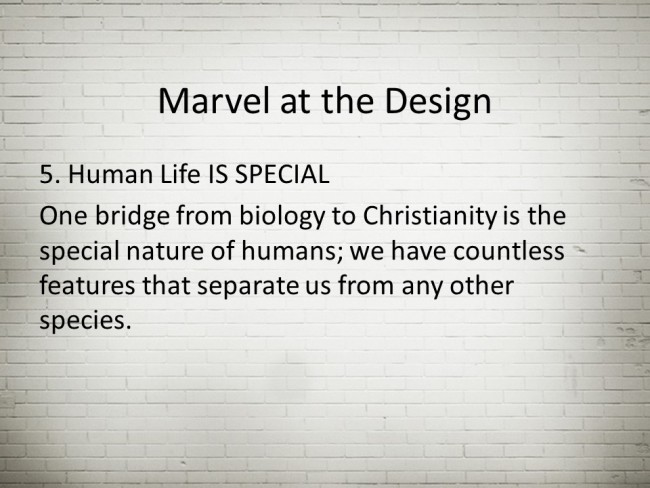 Some of these features are: advanced communication skills (depends upon advanced brain power, vocal cord ability to make various sounds, regions of the brain designed for sound and language). Our hands are capable of making tools and handling tools with great precision. Our upright posture enable us to use highly advanced tools like scuba gear and space suits, driving, flying, and sky diving.

Science would say that all the human advantages come from our advanced brain capacity, but why would the brain of other organisms not develop just as much over the same span of chance and time?

Science has a philosophical attachment to Darwinian Theory, so Christians need to have wisdom on when and how to challenge the topic. Maybe you need to learn some challenges to the theory to help people break free from the false view they have accepted. Many will respond in anger and refuse to listen to anything. Perhaps start with other topics, like last week’s lesson before addressing this bombshell, which confronts their entire philosophical framework.

Teenagers: how can we expect better behavior (sex, drugs, violence) if they are no better than an ape that made it? When one is a special creation in the image of God, we have a higher calling.

The evidence of design in physics points to an all-powerful creator who exists outside of time and space.

The evidence of design from biology reveals that God has been intimately involved throughout the history of the world; each cell demonstrates that God was involved in our creation at the level of properly arranging the atoms in our DNA.

This demonstrates that the God revealed through science matches the God of the Bible.

Another video I showed that evening was Dr. Georgia Purdom on, Is Intelligent Design Christian? [ Go ]