This is lesson five of six in the God’s Not Dead series:

Then there is the case of the hot radiator, “Don’t touch it, that is hot and will burn you.” This is what we can call experiential learning.

We saw the final classroom scene where Josh and Professor Radisson go head to head about evil and suffering in the world. It’s pretty intense. 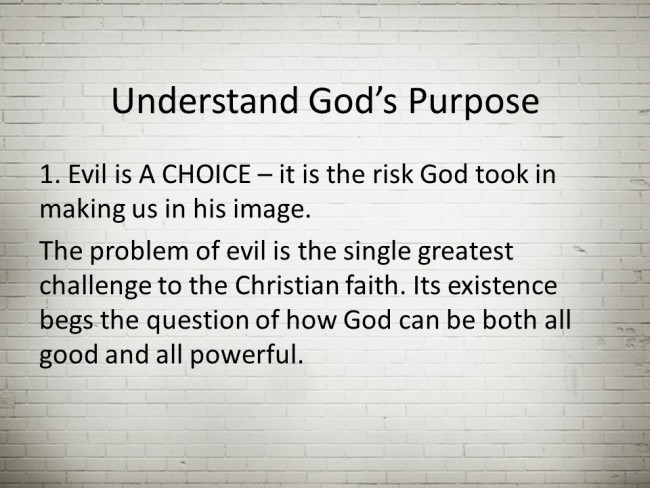 We cannot deny the existence of pain and suffering. Think about wars, the Holocaust, human trafficking, terrorism, but that is not God’s original intention.

Norman Geisler define evil this way: Some have said that evil is a substance that grabs hold of certain things and makes them bad (like a virus infecting an animal) or that evil is a rival force in the universe (like the dark side of Luke Skywalker’s Force). Think about LOVE (a good thing turned bad becomes lust), SEX (becomes pornography or fornication), ALCOHOL (becomes alcoholism and drunk driving), PLEASURE (becomes hedonism).

Refer to the Geisler information on EVIL. [ Go ]

As mankind grew in number, the evil of mankind has grown. God has given mankind the ability to choose to become evil or not. Many ignore God’s guidelines and act selfishly, unkindly, and unwisely.

Skeptic have claimed that theists have caused as much evil as those without faith, but this fact does not discredit God or Christianity. Jesus himself said that many would call themselves his disciples but will not obey his commends. The crusades and the inquisition were led by lost kings and popes, not the people of faith. 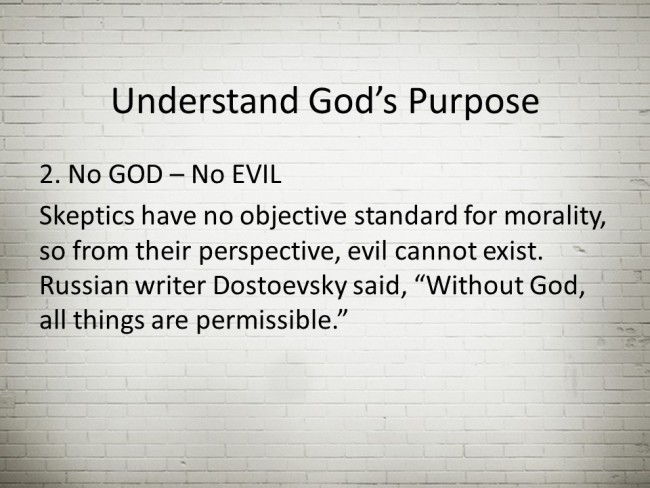 But we must realize that real standards for morality do exist (look at the atrocities down through history). While people may claim that Christianity has caused more pain and suffering through the ages, that is just not true (think about Stalin and Lenin in the Russian revolution, Hitler and Nazi Germany, Pohl Pot and the Khmer Rouge). This is the embodiment of Darwinian evolution that also teaches survival of the fittest, or natural selection.

Skeptics like Richard Dawkins would say that we can rise above our evolutionary instincts but they have no standard to make such a claim. Author C.S. Lewis writes, “How would I know the line is crooked if I didn’t know what a straight line is?”

Imagine finding a rock on the beach. Since it doesn’t come with an instruction manual; without guidelines, you could only guess about its purpose. On the other hand, if you find a car, you know it was designed by an engineer who has a manual on how to operate the car to its greatest capacity. People can follow the manual or create their own guidelines, but violating the designer’s guidelines will lead to a breakdown and it won’t operate effectively.

Imagine an owner of a watch with no guidelines on how to use it. One might use it to stir your coffee of hammer a nail. Obviously the watch would not by used to its full capacity.

If we don’t understand out purpose, we will spend our lives on meaningless distractions, or make idols out of relationships, our career, or some other temporary item. 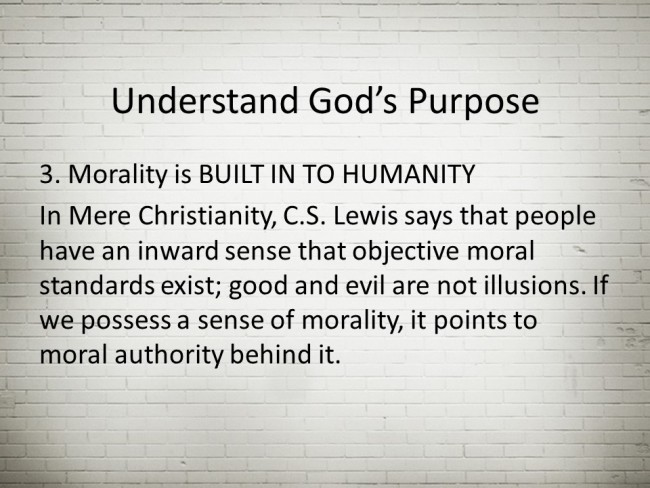 So, the evidence points to the reality of a supreme moral law-giver.

Skeptics who argue that that there can not be any objective moral standards expect others to treat them justly and fairly (human rights, equality for women, equal rights for minorities) but from where do these morals come?

Skeptics say they can still act ethically without religion or belief in God, but they ignore the fact that mankind is created in the image of God. We share his common set of moral standards, regardless of culture of context. Professor Radisson stated, “Does a people need God to be good?” Think about it, if we are just animals with no ultimate purpose, then on what basis do we make moral judgments?

Behaviors like kindness, mercy, equality, and forgiveness are true and good because we were brought up in a culture shaped by Christian values. Civilizations that reject a higher power than themselves inevitably degenerate into authoritarian states with little concern for human rights (think Communists and Nazis). 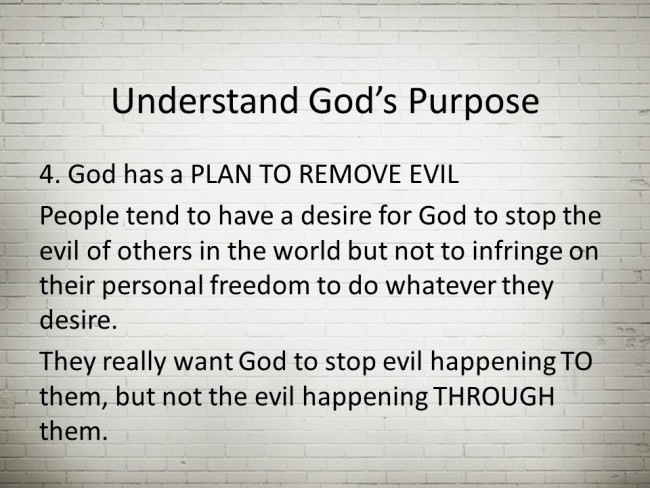 There is a way to stop all the evil in the world… God could kill every person on the planet. Then evil would stop.

God has a plan to remove evil by changing the heart of every person, that way God can extract evil without destroying the person. This removes evil one person at a time. Let’s start with each person sitting here today.

When we come to Christ, the Holy Spirit work on reshaping our hearts; driving motivations shift from primarily serving ourselves to serving others. It’s not natural, it is supernatural. Crime could disappear, mercy ministries would flourish, we would treat people with kindness and respect… could this be a revival? 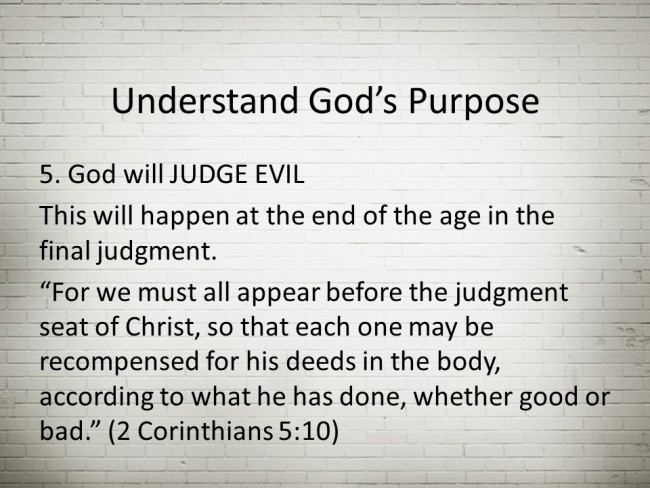 This should produce a sense of fear of the Lord… People often talk about a good kind of fear, like awe and respect, but Jesus addressed downright FEAR, “But I will warn you whom to fear: fear the One who, after He has killed, has authority to cast into hell; yes, I tell you, fear Him!” (Luke 12:5). When it comes to judgment, “by the fear of the Lord one keeps away from evil.” (Proverbs 16:6).

It is the knowledge that we will give an account of our finances that we file our 1040 form; we will give an account to police for our evil actions. Judgment is not contrary to God’s character of mercy and love and compassion. He would be unjust if he allowed evil to go unpunished. Acts 17:31 says that, “… He has fixed a day in which He will judge the world in righteousness through a Man whom He has appointed, having furnished proof to all men by raising Him from the dead.”

The good news is that he has provided a way of forgiveness. In God’s patience, he delays judgment to people may turn to him. Understanding the nature of judgment helps us understand the work of Jesus on the cross. Judgment is not something like a scale (one’s good deeds compared to one’s evil deeds). In the new creation, there cannot be ANY evil or the corruption cycle begins all over again. So, Jesus died to pay the penalty for sin and defeat its power in our lives. We submit to him in faith and then God’s power begins a transformational process making us like him, sanctification.

The last question in the video clip, Josh says, “How can you hate someone if they don’t exist?”

Skeptics use the existence of evil and suffering as an attack on Christianity, but denying God does not take away the pain. It just takes away their hope. Only the Christian faith offers a true explanation for the cause of suffering in the world. It provides the resources to defeat it personally and socially. It provides hope that God will ultimately remove it.