What does it mean when Paul says he aims to present every man complete in Christ?

We proclaim Him, admonishing every man and teaching every man with all (B)wisdom, so that we may present every man complete in Christ. (Colossians 1:28)

Sanctification is not something described as an automatic process. Believers need instruction to promote their growth in godliness. This instruction focuses on Jesus Christ, not some counterfeit theology. The authentic Jesus with the doctrines we call Christology and Soteriology… these are truths about who Jesus is, and what he accomplished in his life, death, resurrection, and ascension.

There are two things we NEED:

Think about it… WHICH of these do you prefer to hear?

WHAT should be the ratio in each sermon you’ve heard or Bible study your attended? The KEY is WISDOM, in order to be effective. We need to pray for teachers and preachers, leaders given by God to help mature believers in their faith.

The PURPOSE of all of this Paul writes about is to present every man complete in Christ. This is what Paul mentions in passages like in Colossians 1:22.

Does Paul mean that EVERY person will be presented complete, saved, and transformed? Meaning, does Paul preach Universalism? Here he means everyone (Jew as well as Gentile) rather than everyone, like everybody. The issue of the day meant that Gentiles did not have to become Jews in order to be Christians.

WHAT were Paul’s means of accomplishing his goal?

Of all the topics that can be taught in a class or from the pulpit, it is worth nothing without the proclamation of the gospel. If someone is not saved, a good “how-to” or encouraging message is like putting a new suit on a corpse (think about Joel Osteen’s messages). The gospel is what transforms a person from death to life, from the kingdom of darkness into his kingdom of light. 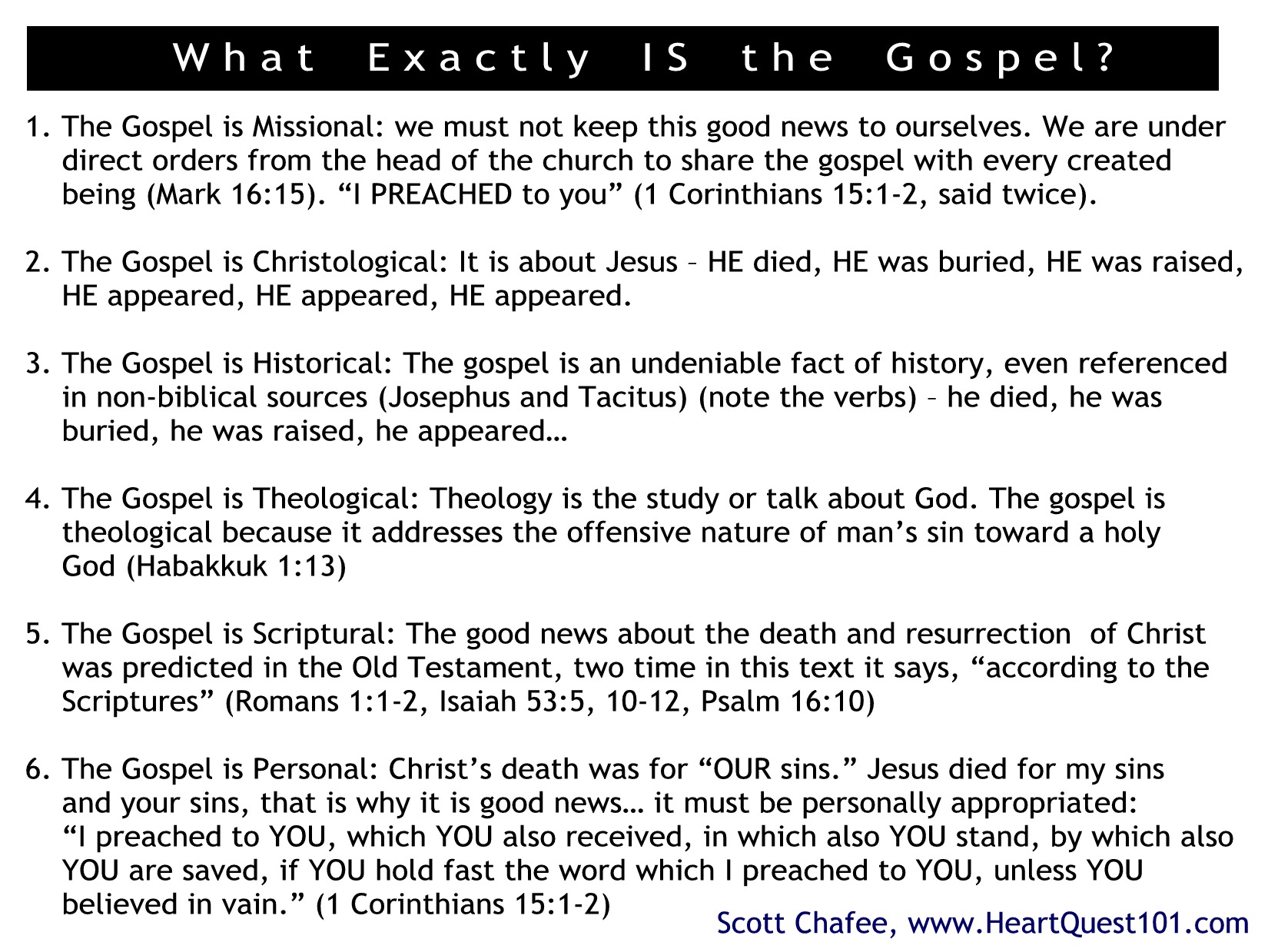 This is the third lesson from the little post card of Jude. He goes on to encourage God’s people to persevere in spite of the danger that faced them.

The Reminder to Remember the Apostles’ Warning (Jude 1:17–19)
The apostles had warned that scoffers would arise in the end times who would follow their own ungodly desires. Jude’s quotation of the apostles’ teaching is a general summary rather than a specific reference. It is the “last times” in relation to Jesus Christ’s return to reign on earth. While they may have claimed to be the truly spiritual group, the false teachers were really worldly minded and shared the viewpoint of unbelievers.

The Positive Instruction of the Readers (Jude 1:20–23)
Since believers are God’s temples under attack by hostile enemy forces, we need to build ourselves up, to strengthen ourselves spiritually, and to pray for God’s help in our warfare. We should also keep ourselves in the sphere of God’s love by abiding in Him (John 15:9–10), and we should keep our hope clearly in view since we have only a short time to remain faithful. Christians should help those who are struggling and perhaps stumbling under the influence of these false teachers and should attempt to restore those who have fallen into error. In the case of those whom heresy has completely swept away, we should have pity on them rather than condemning them without compassion. We should fear God’s displeasure and discipline if we embrace their error. We should avoid any contact with these people because of the corrupting influence they can have on us through their words and actions.

Jude concluded his brief epistle with a formal doxology that included a prayer for his readers. His benediction (or doxology) is one of the most known in the NT (Romans 11:33–36; 16:25–27; 2 Corinthians 13:14; Hebrews 13:20, 21). He wanted to assure them of God’s ability to help them remain faithful in spite of the apostasy that threatened them. Our confidence rests in God’s ability to keep us safe and faithful. Jude returned to the theme of salvation which he had hoped to develop at the beginning (Jude 1:3).

As we continue taking a look at the little post card of Jude, we find lessons that could be right out of the news today.

He first exposed the nature of their error (Jude 1:8–9). Like dreamers living in the fancies of their own imaginations, the apostates substituted an unreal world for the real world of divine truth. Their presumption stands out boldly in comparison with Michael’s submission and reverence in dealing with another powerful angel, Satan. Michael could not reject the devil’s accusation on his own authority because he was not his judge. All he could do was ask the Lord, who alone is Judge, to condemn Satan for his slander.

Michael is the chief angel of God who especially watches over Israel (Daniel 10:13, 21, 12:1) and leads the holy angels (Revelation 12:7). Nowhere else in Scripture is this struggle over the body of Moses mentioned. Michael had to fight with Satan to do God’s will, as he did on another occasion in Daniel 10:13.

Regarding the body of Moses: Moses died on Mt. Nebo in Moab without entering the Promised Land and was secretly buried in a place not known to man (Deuteronomy 34:5, 6). It would likely be that this confrontation took place as Michael buried Moses to prevent Satan from using Moses’ body for some twisted purpose. Perhaps Satan wanted to use it as an idol, an object of worship for Israel. God sent Michael to be certain it was buried. This account was recorded in the pseudepigraphal Assumption of Moses.

Jude next explained the seriousness of the error of the false teachers (Jude 1:10–13). The things they did “not understand but reviled” probably refer to aspects of God’s revealed will that they chose to reject. What they did understand was the gratification of the flesh, and that would destroy them (Jude 1:11).

Each of these three examples shows a different aspect of unbelief. Six more illustrations, this time from nature, emphasize the seriousness of the false teachers’ error (Jude 1:12–13).

We can see from these descriptions, we must be diligent to recognize them and keep them out of the church. They are not interested in building up the body of Christ but satisfying their own lusts. They murmur and complain, Christians are commanded not to do this (Philippians 2:14-16). They use great words to sway the ignorant, those who don’t know any better (2 Peter 2:18). They are full of hot air and use flattery to manipulate others. There is something about fallen human nature that loves to believe a lie and even follow it, no matter where it may lead.

Jude further warned of the consequences of their error (Jude 1:14–16). He quoted loosely from these non-canonical, pseudepigraphal writings (meaning, the actual author was not the one named in its title) (Jude 1:14, 9). He does these to support his points. Was this acceptable? Since Jude was writing under the inspiration of the Holy Spirit (2 Timothy 3:16; 2 Peter 1:20, 21) and included material that was accurate and true, he did nothing differently than Paul (Acts 17:28; 1 Corinthians 15:33; Titus 1:12). The point is that false teachers would be the objects of God’s judgment. Much like the former grumblers, the false teachers in Jude’s day grumbled primarily against God. They pursued their lusts for sensuality and gain (Jude 1:15, 16).

All we know about Enoch is found in Genesis 5:18-24 and Hebrews 11:5. He was the seventh from Adam to identify him as the godly Enoch from the ungodly one (Genesis 4:17) in Cain’s line. Enoch’s original message was likely about the coming Flood. False teachers mocked the prophecies of coming judgment. Enoch’s judgment had characteristics:

Chapter two of Second Peter brings the whole topic of false teachers. Ever since the time of Christ there have been those who twist the teachings of Jesus and the doctrines of the church. At times these differences have brought about greater understanding and clarity involving theology, like during the Reformation. Other times brought about significant deviation from the truth, which have been called heresies.

Jesus was warning the people of His day to be on the lookout for gifted leaders who would take advantage of them and lead them astray. They would be men who looked good on the outside but were corrupt on the inside. They would perform well. To put it bluntly, great preachers are not necessarily great Christians.The people can be fooled and led astray.

Peter warned his readers of the false teachers who presented a message contradictory to that of the apostles. He wrote of the characteristics of false teachers, the consequences of their teaching, their conduct, and their condemnation.

The Characteristics of False Teachers (2 Peter 2:1–3)
False prophets in Old Testament times sought to lead God’s people away from the revelations of the true prophets, and false teachers in Peter’s time tried to lead God’s people away from the teaching of the apostles. The heretics added some of their own false teaching to the orthodox faith, thereby denying the One they professed to submit to as Christians. Their judgment would be sudden. Reckless and hardened immorality would accompany their doctrinal error. False teachers typically desire to satisfy themselves rather than God, which leads them to take advantage of their audiences. God is never late or asleep in executing justice, though He is patient (see 2 Peter 3:9).

The Consequences of False Teaching (2 Peter 2:4–10a)
Peter next described the consequences that follow false teaching to help his readers see the importance of avoiding it. He gave three examples of apostates in the past.

All three examples show that God will not only punish the wicked, but will also rescue the righteous from the judgment He will send on the ungodly who surround them.

The Conduct of False Teachers (2 Peter 2:10b–19)
Peter emphasized the conduct of false teachers in order to motivate his readers to turn away from them. Rather than behaving as good angels do, the false teachers acted like animals. Peter believed the false teachers therefore deserved treatment similar to that of animals. God will give them punishment in keeping with their crimes. Their practices were similar to stains on the clean fabric of the church, blemishes on its countenance, since the practitioners claimed to be Christians. The false teachers sinned without restraint and lured people not firmly committed to Jesus Christ to join them. They were also trying to get the Christians to participate in idolatry and immoral practices. Like the springs and mists Peter described (2 Peter 2:17), the false teachers failed to deliver what they promised and so were hypocrites. They appealed to their audiences with boastful words, promising more than they could deliver. They appealed to people who were only just escaping from those who live in error, probably new Christians and/or older carnal ones who were still in the process of making a final break with their pagan practices.

The Condemnation of False Teachers (2 Peter 2:20–22)
Peter focused in these verses on the false teachers’ final doom to warn his readers of the serious results of following their instruction. The false teachers in view had evidently heard the gospel preached and fully understood the apostles’ teaching that Jesus Christ is both Lord and Savior but had rejected it. They only escaped the defilements of the world in the sense that they had understood the gospel, which liberates sinners. But they had thrown away their key to deliverance and had thereby become entangled and overcome again by the defilements of the world. Their first state was also eternal damnation without having heard the gospel, but their final state was eternal damnation for having rejected the gospel.

It would have been better for the false teachers never to have gained full knowledge of God’s commandment regarding holy behavior than having gained it to reject it. Dogs return to corruption that comes from within themselves, and pigs return to filth they find outside themselves. False teachers do both things.