This is the second of six in the God’s Not dead series, these are my teaching notes and slides: 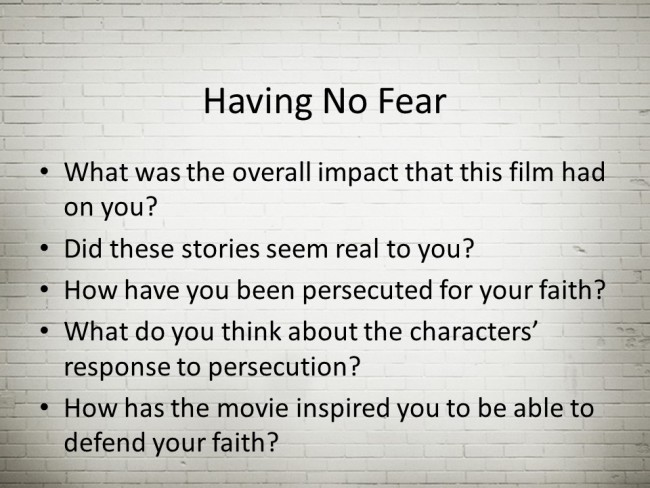 One of the major themes in the movie was that of persecution; all around the world people suffer for simply having faith in Jesus. Some would argue that the world is much more tolerant today than it was centuries ago, but the facts say otherwise. In many parts of the world, people lose freedoms; and thousands of people are killed because of their faith in Christ.

While in America, tolerance is demanded for most any lifestyle or belief, yet for those who believe in Christ, they are met with systematic intolerance, which is grossly unfair and often absurd. Believers are often intimidated.

There is a challenge called moral relativism: the philosophy that teaches all beliefs are equally right and true. While people have the right to believe whatever they want about God, that doesn’t mean that all beliefs are true. Jesus warned about persecution (Mark 4:17) But since they have no root, they last only a short time. When trouble or persecution comes because of the word, they quickly fall away.

Let’s look at a three clips from the movie, about people who experienced persecution for simply having faith in Jesus, or even discussing the existence of God… 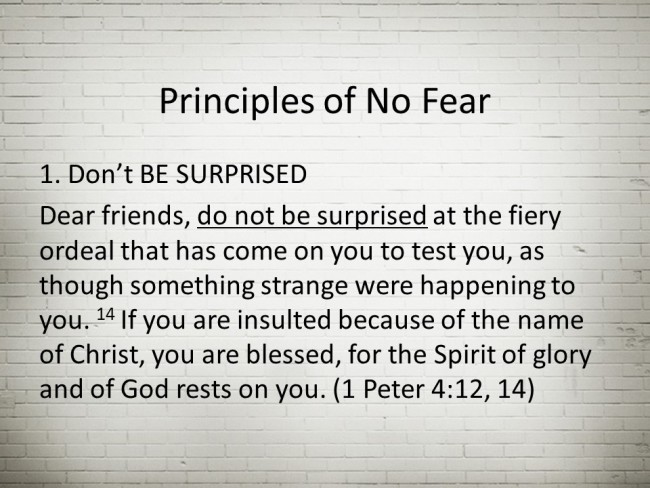 It was all through the movie: Josh and his long time girlfriend, Martin (the Chinese student) had a very negative father and he wanted him to focus on studies and grades, not God, and Ayisha, the girl in the Muslim family, whose father wanted her to recant, that “there is one God and he is not begotten.” (John 3:16)

95% of Americans say they believe in God, but many are moral relativists who don’t try to live according to God’s Word (Josh’s girlfriend is a great example, she did not want faith to get in the way of career plans or opportunities). She scoffed at the notion that Josh would put God’s desire over her wishes. 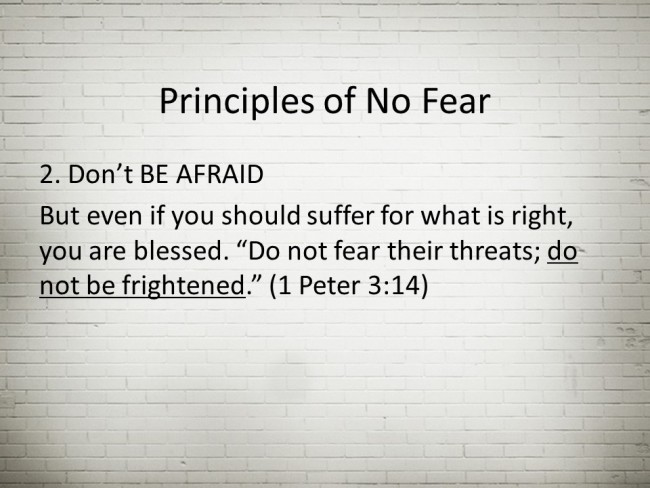 If we are to make a difference in the world around us, we MUST get rid of this type of paralyzing fear.

When we fear criticism: we learn that our identity and value is based on what others think instead of God’s acceptance of us.

When we fear consequences: we learn to trust in circumstances and decisions of others more than Jesus’ care for us (Matthew 6:25-34).

When we fear not attaining our goals: we learn that we have placed our hope for meaning and fulfillment in some worldly achievement over being a valuable part of God’s kingdom.

Let’s pray for a break in these strongholds (2 Corinthians 10:4).

Remember that there are 365 references to “Fear Not” or “Don’t be Afraid.”  Don’t let fear stop you from doing the right thing. 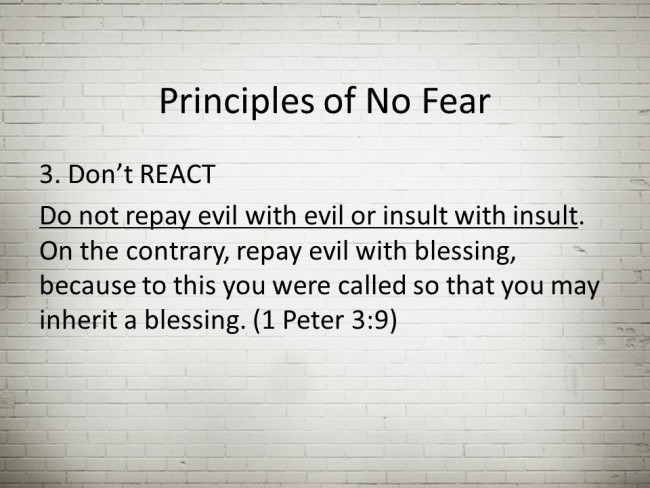 There may be other reason why someone might be adversarial to you and your faith. Don’t respond in anger, and remember that Satan, the adversary has blinded the people of this world (2 Corinthians 4:4).

Their hostility might be the result of painful experiences in their past, in the professor’s case, losing his mother to cancer after asking God to heal her. In session 5, we will see that suffering is a huge stumbling block for many people. Try to find out the source of their pain, Josh asked, “What happened to you?”

Others may respond negatively because they feel Christians are bigoted and narrow minded, so, in essence, they are prejudging you. (MY college story of introducing myself as a follower of Jesus, a Christian = biased).

In philosophy, there is a straw-man argument: people build a false picture of something or someone, and then they attack it. How many times do we have to dismantle the negative press and false notions about Christianity? Maybe all Christians are hypocrites. Help them realize that out of 2 billion Christians, there are likely only a few who have hurt or disappointed them.

Remember that insults are not arguments: don’t focus on the insult but on the truth and reasonableness of your beliefs. While there may be many bad things that professing Christians have done, God still exists and has an ideal. 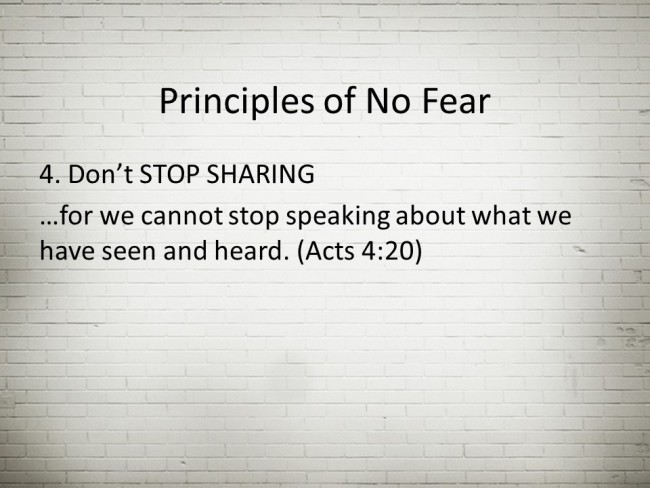 There is an enemy of God and mankind, Satan. He is not the red suited figure with horns and a pitchfork, but an entity of evil that exists. We are wrestling with powers and principalities and spirits that affect hearts and minds (Ephesians 6:10). The goal of our enemy is to shut down the preaching of the gospel and the truth that God exists. It is vital that you not let persecution shut you down.

The apostles were told to stop speaking of the resurrection (Acts 4:20) but they could not stop speaking about what they had seen and heard and did so with BOLDNESS (Acts 4:29). The Romans did not like the fact that Christians claimed loyalty to another king, in fact, every knee would bow and tongue confess that Jesus is Lord (Philippians 2:10-11).

When you are told to stop, find creative ways to put in a good word for Jesus, his word will not return void (Isaiah 55:11). 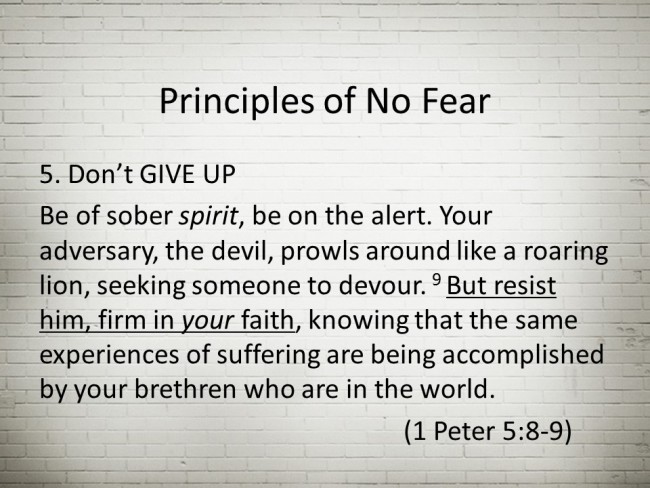 Be of sober spirit, be on the alert. Your adversary, the devil, prowls around like a roaring lion, seeking someone to devour. 9 But resist him, firm in your faith, knowing that the same experiences of suffering are being accomplished by your brethren who are in the world. 10 After you have suffered for a little while, the God of all grace, who called you to His eternal glory in Christ, will Himself perfect, confirm, strengthen and establish you.

Cares and worries of the world can distract us from God’s purposes in our lives; we can lose focus on our mission to share the gospel. Don’t give up; negative reactions can take a toll on our self-image and sense of worth (Allan’s story in Curacao, no fruit yet remaining faithful).

Stay strong, one day people might recognize your genuine integrity and come to you during times of struggle for counsel and guidance.

Some people will see your life and they refuse to repent, just seeing you brings out their rebellion. Rather than be convicted by the truth, they will suppress the truth and in anger lash out at you.

Today there is more persecution toward Christians than in any other time in history. More believers were martyred for their faith in the 20th century than in 1900 years prior combined.

You would think that technology and globalization would allow greater tolerance and understanding to everyone, but the opposite has occurred. The claims of Christ have set him apart from all other faiths and that is the offense that caused mankind to stumble.

Keep this in mind… Indeed, all who desire to live godly in Christ Jesus will be persecuted. (2 Timothy 3:12).

We must remember that we cannot live the Christian life on our own and that the enemy will come at us with all he can to disable and distract the followers of Jesus. It is a spiritual battle that affects life in the real world. Stand strong and use your weapons.

Our authority comes out of who we are in Christ, and our capacity to intimidate the enemy comes out of our intimacy with God. — Graham Cooke

God judged it better to bring good out of evil than to permit no evil to exist. — St. Augustine of Hippo

Wherever you are, be all there. Live to the hilt every situation you believe to be the will of God. — Jim Elliot

Paul uses faith to mean loyalty, fidelity, that which we would more naturally call faithfulness:

Paul contrasts faithlessness of Israel to the faithfulness of God:

There is also the unalterable conviction that certain things are true:

Here are two great Christian facts: conviction is an essential part of Christianity and preaching is the medium which produces conviction. Preaching is not designed to produce questions but to answer them, not to awaken doubts but to settle them. Raising question are for helping the hearer to see the need to find the answers in life.

The idea of faith in a creed does not come into the NT until as late as the Pastoral Epistles: the creed of the early church was simply, “Jesus Christ is Lord” (Philippians 2:11)

Christianity is The Faith – allegiance to a person, not a creed:

Faith as a confident hope is a conception which is more characteristic of the writer of Hebrews (Hebrews 11:1) but the idea occurs at least once in Paul: “For we walk by faith, not by sight.”– (2 Corinthians 5:7)

Things which come by faith:

The elements of faith:

The Christian faith in its fullest and best:

This material is from William Barclay, the Mind of St. Paul, 1975.