Jesus is the greatest example of leadership ever known. He had a plan to reach the world with his message of freedom and forgiveness, but left the whole thing into the hands of 12 ordinary men. How did he do it? What was his plan? What was his plan B? How does one take a grand idea, develop a plan, and implement such a bold proposal?

My primary verse for today is Luke 6:40. 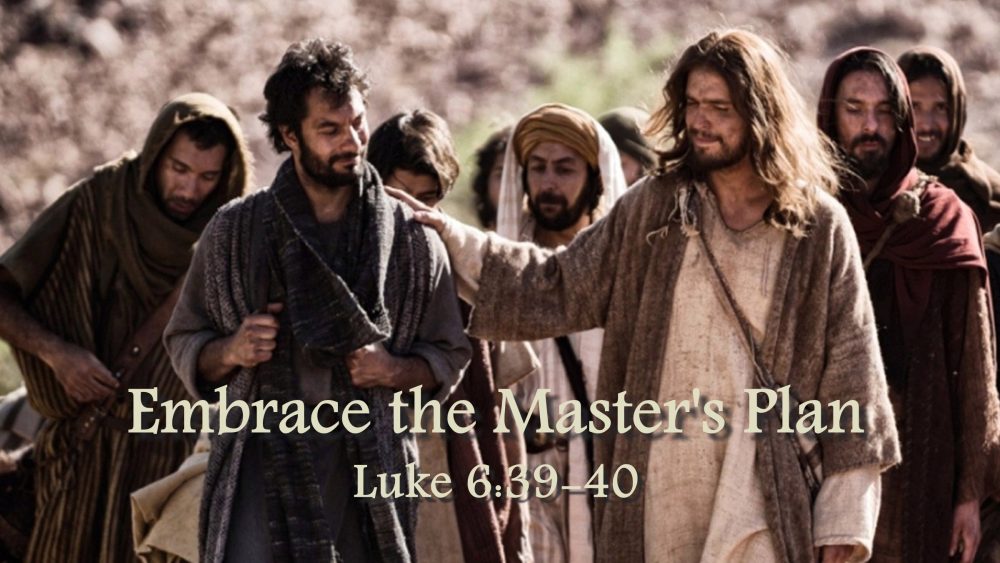 1. Selection – his men were his method (Luke 6:13 – he called together all of his disciples and chose twelve of them to be apostles). He was not concerned with programs to reach the multitudes but with men whom the multitudes would follow. Jesus gathered these men long before he developed any evangelistic campaign, or even preached a single sermon. People were the method our Lord chose to win the world to himself. Jesus literally staked his whole ministry on these twelve men.

Jesus chose men willing to learn – those chosen were not impressive. None held positions of authority or power, in society or in the synagogue. They were for the most part common, laboring men. They were unlearned and ignorant men (Acts 4:13) but they were teachable.

Jesus concentrated on a few – no one can transform the world, unless they are individuals who are transformed. Individuals cannot be transformed unless they are moldable in the hands of the Master. Jesus had many followers, but when the teaching got hard, many no longer followed him (John 6:66). But his closest disciples could not miss the purpose of Jesus, they stuck with him.

Jesus did not neglect the masses – he preached to crowds, healed many, cast out demons, fed thousands, blessed their children, and ministered to their physical needs. Jesus loved them, wept over them, and finally died to save them. So, why not capitalize on the crowds rather than end up with a few ragged disciples to show for his effort? Because Jesus was not trying to impress the crowds, he was trying to usher in a mew kingdom. This means that he would need a few committed followers to lead the multitudes. How can he stir up the masses if he had no supervision and leadership in place? The point? Everything done with a few is for the salvation of the multitudes.

Jesus made a practice of being with his disciples (Mark 3:14). This was the training program of Jesus. There was no college, seminary, online course, periodic membership class, or Sunday School. Amazingly, all Jesus did was to draw men to himself. HE was his own school and curriculum.

“To know” is “to be with” – knowledge was gained by association before long before it was understood by explanation. This makes sense when we remember the question from Thomas in John 14:5-6. He can we know the way? To which Jesus replies that the question has already been answered, “I am the way, the truth, and the life…” just open your eyes to the spiritual and incarnation reality in front of them.

It takes time – this close and constant association meant that Jesus had virtually no time to call his own. Like little children under the feet of their father clamoring for attention, the disciples were always underfoot of the Master.

It is not easy – building men and women is not easy, it requires constant personal attention. Children are not raised by proxy, Jesus taught that discipleship can only be done by staying close to those we lead. We cannot relegate this ministry to some church program and expect it to be effective. It takes intentional mentorship, care, time, and attention. We never birth babies and leave them to themselves, so, every new convert needs a Christian friend to follow until such a time that he or she can lead another person in discipleship. It takes people, not programs.

Jesus expected the men he was with to obey him. They were not required to be smart, knowledgeable, or talented, but they had to be loyal. This was their distinguishing mark, after all, disciple means “learner” or “pupil.” It was not until much later that they were called “Christians” (Acts 11:26).

The way of the cross – following Jesus seemed easy at first, but that was because they had not followed him very far. Being a follower was not about the joy of finding the Messiah, but it meant the surrender of one’s whole life to the Master and submitting to his authority. There would be no compromise, which was a very hard teaching, and not many were willing to pay the price (John 6:25-29).

Counting the cost – those who would not go all the way would fall by the wayside, and Jesus let them go. He did not have time, nor the desire to scatter himself on those who wanted to create their own terms of discipleship. People cannot come to God on their own terms.

Demonstrated by Jesus – absolute obedience to the will of God was the controlling factor in Jesus’ life, the passion week before the cross was no different. His human nature gave consent to the will of the Father, which made it possible for God to use his life fully according to its intended purpose. It is God’s will for us to accomplish his intended work for us (John 4:34, 5:30, 6:38, 15:10, 17:4).

The “parental” example – a father must teach his children to obey him if he expects his children to be like him. In the church, no one can be a leader until he or she has first learned to be a follower.

Jesus wanted his followers to obey him, but in recognizing this truth, his disciples would discover the deeper experience of the Holy Spirit. In receiving the Spirit they would know the love of God for a lost and dying world. They knew they were not just keeping the law, but were responding to the one who loved them, and was willing to die for them.

The compulsion of evangelism – that is why Jesus wasted no time to impress on his followers his own deep compulsion of the love of God for a lost world. Everything he did was motivated by this passion.

It is only the Holy Spirit who enables us to carry on the redemptive mission of evangelism – Jesus always worked in cooperation with the Spirit.

Evangelism is never a human undertaking, but a divine process from the beginning to the end. The Spirit is our comforter, paraclete, our advocate, he comes along side of us to minister through us.

Always remember that we cannot give something away that we do not first possess ourselves. When we have the Spirit of Christ, it is that Spirit that insists that Christ be made known.

Jesus was determined that his followers would learn his way of living with God and others. He needed to get across to them the secrets of his spiritual influence… like…

His prayer life – they could see the strength that prayer gave to his life, they saw it and wanted it, too. It wasn’t a ritualistic practice but a way to communing with the Father. It was based on relationship rather than a wish list.

His use of Scripture – he often impressed on his followers the meaning of ancient texts and how it was relevant to everyday life.

His evangelism – he was concerned for the souls of people and took opportunities to talk with people about forgiveness and everlasting life.

His teaching – Jesus had many lessons for the disciples to learn, and class was always in session. His explanation of parables is a great example.

Jesus was always building toward the time when his disciples would take over the work and ministry in the world.

He would make them fishers of men – face it, no one likes to be told what to do, or be made to do anything.

His first invitation to the disciples (to follow him) said nothing about going out to evangelize the world, although that was Jesus’ plan from the beginning. His method was to get them into a vital experience with God, showing them how it worked, before telling them they had to do it.

Before letting them go out to minister, Jesus would give briefing instruction about their mission. He outlined what to expect, what to say, and what to do (Matthew 10, Mark 6, Luke 9).

They needed to expect hardship – and often warned them about how they would be treated, yet his encouragement was always, “fear not,” because God would never desert them.

On a practical level, we have the same commission to be all about the task of being his witness to the world.

Jesus met with them following their tours of service to hear their reports and to share what God did through them. He rotated between instruction and assignment.

There were questions, illustrations, and warnings to help them understand what they were experiencing. All these were designed to help them fulfill their work of building the kingdom in this world.

There was continuous review and application to bring out the significance of the events or teaching into their lives. This was on-the-job training at its best.

Supervision helped the disciples continue toward the goal he had set for them. He did not expect more from his disciples that they could do, but he did expect them to do their best. Supervision is longer than expected; but we need to develop maturity to the point that one day we will be able to carry on alone, and lead others to come with us.

8. Reproduction – he expected them to reproduce (John 15:16 – I chose you and appointed you so that you might go and bear fruit—fruit that will last).

Reproduction is God’s way for the church to duplicate itself. Through them and others like us, the plan would continue to expand God’s kingdom by reaching the multitudes, one by one.

Victory through witnessing – many of his followers would suffer persecution and martyrdom, but with the end in mind, ultimate victory was certain.

The Great Commission – this is given to disciples of Jesus, not an organization called “the church.” We are to make disciples, and we should strive to embrace the Master’s plan to get it done.

Pray for workers to go into the harvest – this phrase is almost stated in desperation, but in context, it really is a desperate situation to reach people with the gospel. Today, we make the same plea knowing how much needs to get done and how few will step up to do it.

How will people be won to Christ? Through prayer, and gathering fellow laborers. The gospel is the hope of the world, so will we remove every barrier? Repent of every excuse or from our apathy?

Ken has been teaching about vision over the past several weeks, but vision is not just in theory. We need to embrace the vision to help build the kingdom of God here in our community.

Methods vary but our mission always remains the same – it has been said, “marry the mission, but date the methods.” Are we willing to do WHATEVER it takes to reach people we are currently not reaching? It could be that we need to “do things no one is doing” in order to reach people no one is reaching. It sounds scary. It sounds like change.

Will we embrace the Master’s plan and be the church that he has called us to be?

[ Outline from Robert Coleman, The Master Plan of Evangelism ]