What part of the gospel is optional? This is our mission, God’s global purpose…

This book takes you on a transforming journey in authentic discipleship. During his time as pastor of a large and wealthy congregation, David Platt began to see a discrepancy between the reality of his church and the way Jesus said his followers lived. In Radical: Taking Back Your Faith from the American Dream, Platt examines how American Christianity has manipulated the gospel to fit our cultural preferences and challenges us to rediscover the path.

A missionary is one who sacrifices everything except the gospel for the sake of the gospel. How do we get people to think through that lens? How do we change their behavior?

How do people in church feel about community?

How do people in our community feel about community? 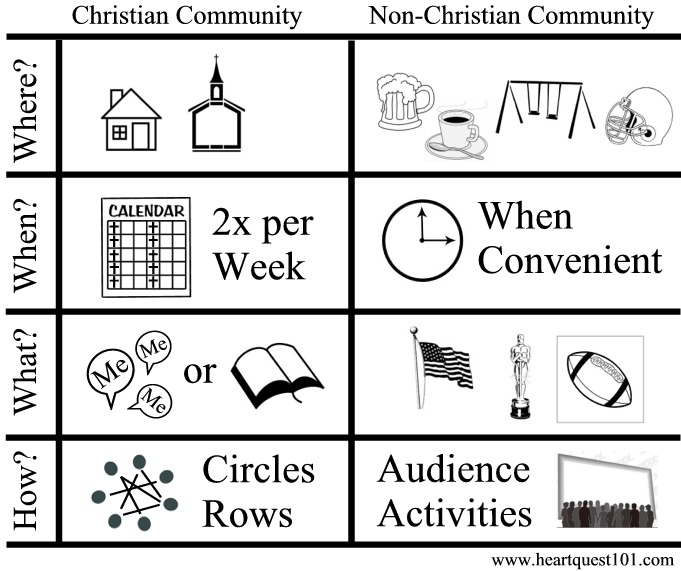 These are fundamentally different: we try to invite people into forms and activities that we do, that are totally inconsistent with the lives that they lead.

Who is a missionary if all we do are these church things? If we desire to be missionaries, we have it backwards. We are often asking people who have no hope of salvation to go to place that they are totally uncomfortable going. We are asking people without the Holy Spirit to adapt to our schedule and programs. We are expecting THEM to learn the new language and culture!

How often do the form that we have actually accomplish the mission of God? We have great intention of being a missional people but or form contradicted our mission. So we need to create fresh expressions of ways to impact our society, to tool our people with tangible practices that empower the people of God to live out their faith in everyday life.

In 1904 William Borden graduated from a Chicago high school. As heir to the Borden Dairy estate, he was already a millionaire. For his high school graduation present, his parents gave 16-year-old Borden a trip around the world. As the young man traveled through Asia, the Middle East, and Europe, he felt a growing burden for the world’s hurting people. Finally, Bill Borden wrote home to say, “I’m going to give my life to prepare for the mission field.”

One friend expressed surprise that he was “throwing himself away as a missionary.” In response, Bill wrote two words in the back of his Bible: “No reserves.”

During his college years, Bill Borden made one entry in his personal journal that defined what his classmates were seeing in him. That entry said simply: “Say ‘no’ to self and ‘yes’ to Jesus every time.”

He was a graduate of Yale University in 1909 and of Princeton Theological Seminary. Borden was converted to Christianity under the ministry of Dwight L. Moody. He later decided to become a missionary to the Muslims of China, but died of spinal meningitis in Egypt during his training there at the age of 25. He is buried in the American Cemetery in Cairo.

When news of William Borden’s death was cabled back to the U.S., the story was carried by nearly every American newspaper. “A wave of sorrow went round the world . . . Borden not only gave (away) his wealth, but himself, in a way so joyous and natural that it (seemed) a privilege rather than a sacrifice” wrote Mary Taylor in her introduction to his biography.

Across town in the Egyptian National Museum is another grave, this one is called the King Tut Exhibit. The Boy King was only 17 when he died and his tomb was filled with literally tons of gold. The Egyptians believed in the afterlife, and that you could take it with you. But all of King Tut’s eternal treasures stayed right there until Howard Carter discovered his burial chamber in 1922. It hadn’t been seen or touched in 3000 years.

There are two graves in Cairo, one is off the beaten path, dusty and littered with garbage while the other is filled with unimaginable wealth. Our phrase of the month has been “you can’t take it with you, but you can send it on ahead.” One had invested in eternity and the other did not.

After Borden’s death, his Bible was found and given to his parents. In it they found in one place the words “No Reserve” and a date placing the note shortly after he renounced his fortune in favor of missions. At a later point, he had written “No Retreat,” dated shortly after his father told him that he would never let him work in the company ever again. Then shortly before he died, when in Egypt, he added the phrase “No Regrets.”

God may not call you to the international mission field, but it is an insult to our faith if we don’t ask the question, “What do you want from me?” or “What do you want me to do?” There are many needs in this world and many pathways to serving. The first step is to embrace the mission, then we can submit to the father’s direction, get out of the boat and onto the water where Jesus is calling out your name.

On Borden’s Tombstone in Cairo:

Apart from faith in Christ there is no explanation for such a life.

What will people say about you? Are there changes you need to make in your life to invest more in eternity?

I found a great article about this year’s Heisman Trophy winner, Tim Tebow, having his priorities in order. He’s an MK (missionary kid), a committed follower of Jesus and a faithful member of First Baptist Church Jacksonville, Florida.

In a profile aired on ESPN during the Heisman award ceremony, Tebow said his priorities are: “number one, my faith in God; number two, my family and my relationships with my family; number three, academics; and number four is football.”

His mother, Pam Tebow, in the profile, said she declined the advice of a doctor to get an abortion after she became seriously ill and dehydrated when pregnant with Tim, her fifth child while living overseas. Bob Tebow said his son is a “miracle baby and so we have reminded him that hundreds of times.” He was homeschooled but allowed to play high school football thanks to a Florida law.

There are several quotes from his pastor, Mac Brunson, about the entire family’s commitment to Christ.

“I think who he is is a great tribute to his mom and his dad, in fact the whole family,” Brunson said. “It’s a family that’s incredibly dedicated to the Lord, dedicated to missions. They walk the walk. They just don’t talk about it; they really walk the walk. It’s a close family, and you have to admire the family, not just Tim, but the entire family as well for their commitment to the Lord and the Lord’s work.

“They are really an example of what a family can be under Christ because all of them are so gifted in so many different ways,” Brunson continued. “He’s got a brother who is an incredible athlete. He has a sister who is an incredible teacher. His mother speaks, his dad preaches and has this mission effort in the Philippines. They’re all just talented, gifted. They’re close. They’re a great example of what a family can be when Christ is Lord of everyone’s life.”

I liked this article because Tebow sets an example for students today, standing up for what he believes in, as well as excelling in academics and athletics; a real role model. Not just a guy who crosses himself after a great play, but a young man who can be at the top of his game and still be faithful in his relationship with Christ. The world has plenty of people who talk a good game. Living it out can communicate to others that what we believe really is something significant.