To properly understand the Bible, knowledge of the original language is helpful to gaining the proper meaning of the text. While I am no Greek scholar, I post this here for quick reference.

Number and Person: Before discussing tense, voice, and mood, it is first necessary to have an understanding of person and number.

Tense: Tense plays a very crucial role in the study of New Testament exegesis. Dana and Mantey understood its significance in saying that “no element of the Greek language is of more importance to the student of the New Testament than the matter of tense” Tense deals both with time and kind of action. Ancient Greek focused more on kind of action; however, time does play a role in verb tense when the mood is indicative.

The aspect of a verb correlates with the kind of action. It determines whether the verb’s action is punctiliar, linear or perfected. These are described in the following table.

Voice: Biblical Greek has three voices which indicate whether the subject is the performer of the action or the recipient of the action, active, middle, and passive:

Mood: There are four moods in Greek. They demonstrate the relationship between the action of the verb and reality. They denote whether the action is factual, potential, wishful, or a command.

Infinitive: An infinitive is a verb that can be used to function as a noun and is therefore referred to as a “verbal noun.” An example may be, “to follow.” Neither person nor number is found in the infinitive and it does not have mood designation. The Greek infinitive is the form of the verb that is usually translated into English with the word “to” attached to it, often used to complement another verb. For instance, “For to me to live is Christ” (Philippians 1:21), the words “to live” are an infinitive in Greek and are functioning as the subject of the sentence (a noun).

Participle: A participle is considered a “verbal adjective.” It is often a word that ends with an “-ing” in English (such as “following,” “speaking,” “going,” or “seeing”). It can be used as an adjective, in that it can modify a noun (or substitute as a noun), or it can be used as an adverb and further explain or define the action of a verb. For example:
In an adjectival use: “The coming One will come and will not delay.” (Hebrews 10:37) or in an adverbial use: “But speaking truth in love, we may grow up into Him in all things.” (Ephesians 4:15).

Many Christians are not exactly sure who they are in Christ, so here are a few things the Bible tells us about being in Christ:

In order to get the most out of personal Bible study, try using a form like this one, a Chapter A Day / Verse A Day. Read a whole chapter but focus on one verse in this chapter that really speaks to you today: 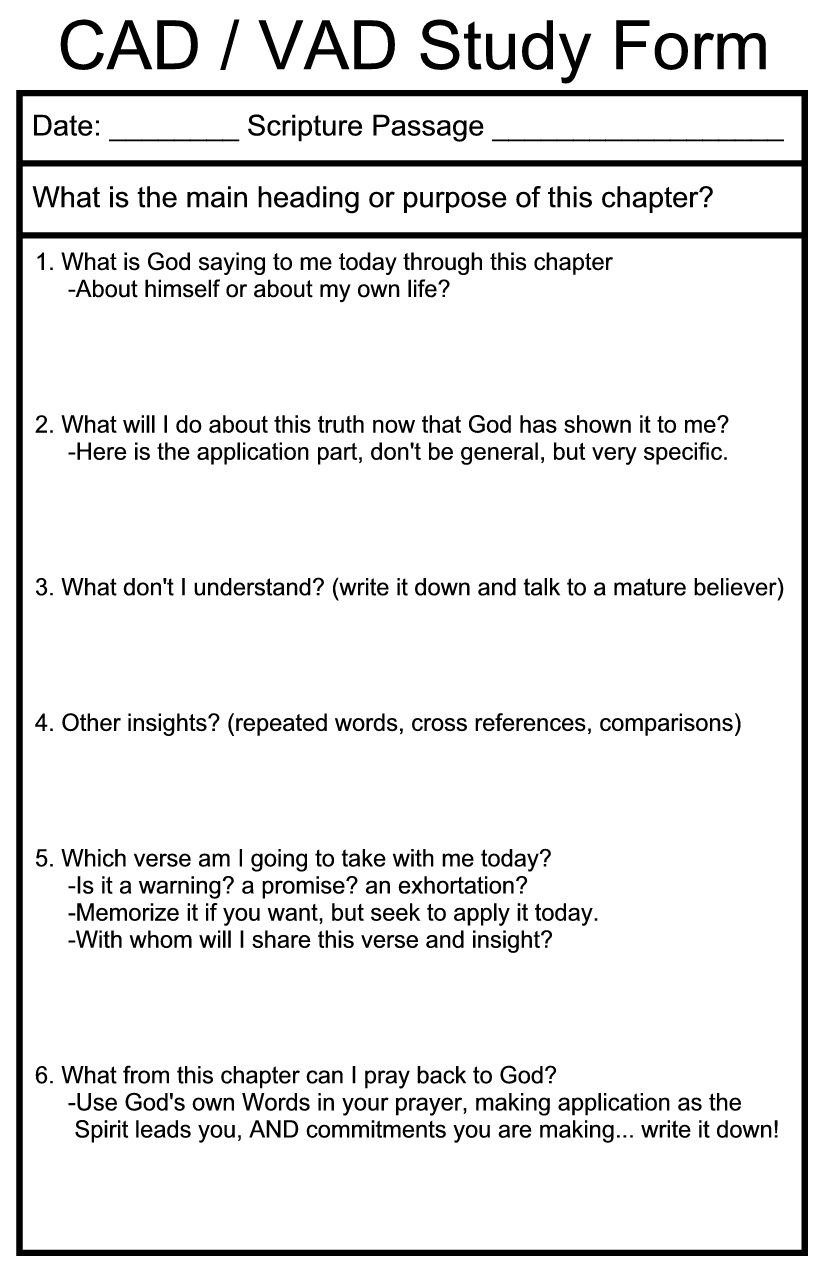 God wants the Word of Christ to richly dwell in us (Colossians 3:16) and his Word change our lives. Many times we don’t know where to begin… start in Genesis? Matthew? John? Revelation? Some say to read for content, doctrine, or instruction and rules, while others say to read the Bible devotionally. With this method you can study the Bible for APPLICATION. The emphasis is on what the Bible says, and also on what God is saying to YOU.

Where to start? How about in the gospels in order to meet Jesus fresh each day at the very beginning? John, Mark, Luke, then Matthew. You can mix up your chapters by reading from the Old Testament some weeks and then back to the New Testament.

This is not about checking off these chapters in your “read the Bible through in a year” plan, it is about seeking the God of the Bible. The idea is to meet with God daily (Luke 9:23).

This is an adaptation of CAD/VAD, 1989, College Park Ministries, Carmel IN

How does one convince a nonbeliever that the Bible is the Word of God?

Before I try to answer that question directly, let me make a distinction that is important at the outset. There’s a difference between objective proof and the persuasion or conviction that follows. John Calvin argued that the Bible carries both persuasion and conviction in terms of its internal testimony—the marks of truth that could be found just by an examination of the book itself—as well as external evidences that would corroborate that substantial evidence to give solid proof for its being the Word of God.

Yet the last thing people would want is a book telling them they are in desperate need of repentance and of a changed life and of bowing in humility before Christ. We don’t want that book to be the truth. Calvin claimed that there is a tremendous bias and prejudice built into the human heart that only the influence of God the Holy Spirit can overcome. Calvin distinguished between what he called the undicia—those objective evidences for the trustworthiness of Scripture—and what he called the internal testimony of the Holy Spirit, which is necessary to cause us to surrender to the evidence and acknowledge that it is the Word of God.

But I think this is a critical issue upon which so much of the Christian faith depends. The Bible makes the claim that it is the unvarnished Word of God, that it is the truth of God, that it comes from him. God is its ultimate author and source, though indeed he used human authors to communicate that message.

In speaking with people about this, we have to go through the laborious process of showing first of all that the Bible as a collection of historical documents is basically reliable. The same tests that we would apply to Herodotus or Suetonius or any other ancient historian would have to be applied to the biblical records. The Christian should not be afraid to apply those kinds of historical standards of credibility to the Scriptures, because they have withstood a tremendous amount of criticism from that standpoint, and their credibility remains intact.

We move from there in linear fashion. If we can on the basis of general reliability come to the conclusion that Jesus Christ did the things that history claims he did, it would indicate that Jesus is more than an ordinary human being and that his testimony would be compelling.

I would move first to a study of the person of Jesus and then ask the question, what did Jesus teach about Scripture? For me, in the final analysis, our doctrine of Scripture is drawn from the teaching of Jesus and from our understanding of who he is.

I thought I would post a few practical suggestions for small group leaders on how to lead a small group. While it is implied that one would lead the group, how can one lead more effectively?

Commitment: Here are a couple verse to emphasize this point, “In all that he did in the service of the Temple of God and in his efforts to follow God’s laws and commands, Hezekiah sought his God wholeheartedly. As a result, he was very successful” (2 Chronicles 31:21) and “Work willingly at whatever you do, as though you were working for the Lord rather than for people” (Colossians 3:23). The truth is that a leader is committed.

Creativity: “for through him God created everything in the heavenly realms and on earth. He made the things we can see and the things we can’t see—such as thrones, kingdoms, rulers, and authorities in the unseen world. Everything was created through him and for him (Colossians 1:16). The principle at work is that a leader is creative, which God will grant to the leader when asked.

Confidence: “And I am certain that God, who began the good work within you, will continue his work until it is finally finished on the day when Christ Jesus returns” (Philippians 1:6). “And because of my imprisonment, most of the believers here have gained confidence and boldly speak God’s message without fear” (Philippians 1:14). “Wait patiently for the Lord. Be brave and courageous. Yes, wait patiently for the Lord” (Psalm 27:14). “And God will generously provide all you need. Then you will always have everything you need and plenty left over to share with others” (2 Corinthians 9:8). The spiritual principle is that a leader is confident.

Perseverance: “Then he said to me, “This is what the Lord says to Zerubbabel: It is not by force nor by strength, but by my Spirit, says the Lord of Heaven’s Armies” (Zechariah 4:6). The principle is that leaders are developed over time.

Here are a Few Tips for Leading a Small Group: