Here are my notes for the third session of The Forgotten God, by Francis Chan, which includes questions for my 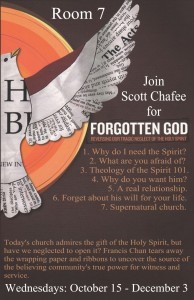 small group, quotes from the book, and other observations. Remember these are notes, and not a complete article on the topic. Please purchase the book to support the author.

If we stop short of applying the truth to our lives, then we do not actually grasp that truth. Our belief determines action.

More important than what we know is how we act. For lack of understanding we grieve the Spirit.

Think about KGBC in light of the huddle analogy. How have you been running from the huddle to the bench?

God gave the Spirit so that we might change the world. How might we look if we all began running plays?

We study biblical truth, which makes us smarter and knowledgeable, but doesn’t affect our lives. We are educated far beyond our obedience.

So, the result of this study could be that we walk around with more knowledge of the Spirit, or we can know the Spirit.

What the Spirit does in and through us:

Now that we know all this, we must ask, “What does the Holy Spirit want from me right now?” “How can I cooperate with him in his work?” Don’t just ask what he can hypothetically do, but ask what he can do in your life.

Ponder the amazing power of the Spirit…

Here are some quotes from the book:

In a recent class on Wednesday nights, I have a friend who asked an interesting question: “What is God’s Glory?” Admit it, that’s not really an easy question to answer. I always sense that it was ascribing to God the honor due him, that he is worthy of our worship, praise and obedience.

If you spend much time in church, you hear God’s glory mentioned all the time. Contemporary songs and classic hymns celebrate God’s glory. Many worship traditions include the Gloria Patri: “Glory be to the Father, and to the Son, and to the Holy Spirit…” Preachers tell us we should seek to glorify God in all we do. In the Reformed tradition, the catechism reminds us that the chief purpose of our lives is “to glorify God and enjoy him forever.”

But, have you ever wondered what the glory of God really is? When we speak of God’s glory, what are we talking about? How do you answer my friend’s question?

According to theologian Millard Erickson, the Hebrew word for “glory” refers to a perceivable attribute (an individual’s display of splendor, wealth and pomp), but in relation to God, it does not point to a particular attribute, but rather to the greatness of God’s entire nature.

Ezekiel 10:4 helps us to get a glimpse of and understand God’s glory: “Then the LORD’s glory rose from above the winged creatures and moved toward the temple’s threshold. The temple was filled with the cloud, and the courtyard was filled with the brightness of the LORD’s glory.” The word translated here as “glory” is kabod in Hebrew. This word comes from a root with the basic meaning of “heavy.” From this root word came a word meaning “rich.” Ancient Hebrews would refer to a rich person as “heavy in wealth” much as we might say someone is loaded. The literal sense of kabod also included being loaded with power, reputation, or honor. It’s from this use of the word that we get the meaning of glory.

So, God’s glory is God’s weightiness in wonderful qualities such as might, beauty, goodness, justice, worthiness and honor. When it comes to these characteristics and so many others, God has them in superabundance.

When we think of God’s glory, we remember that God has all good things in greater quantity and quality than we can ever imagine. Notice, also, that God’s glory is solid and substantial. It isn’t mere reputation. It isn’t dependent on anyone or anything else. God’s glory reflects his essential nature.

Yet the notion of heaviness does not fully convey the glory of God. In fact, if we equate God’s glory with heaviness, we might miss an essential quality of his glory. Look again at Ezekiel 10:4. God’s glory is not like a giant rock that sits there passively because it is so large it cannot do anything else. Rather, God’s glory shines like the sun.

In fact, if we’re looking for an image to represent the glory of God, the sun is a strong candidate. For one thing, the sun is the heaviest object in our solar system (with a weight estimated at more than a hundred times that of the earth). But, of course, the sun doesn’t just sit there. It is continuously active, burning so fiercely that it lights and warms the earth, which is about 93 million miles away.

The similarity between God’s glory and the sun is found in Scripture. Consider the promise of Isaiah 60:19: “The sun will no longer be your light by day, nor will the moon shine for illumination by night. The LORD will be your everlasting light; your God will be your glory.” This promise comes true in the vision of the heavenly city found in Revelation 21:23: “The city doesn’t need the sun or the moon to shine on it, because God’s glory is its light, and its lamp is the Lamb.”

You and I are called to live our lives in the light of God’s glory. We do so when we acknowledge his glory in worship, and when we live worshipfully each moment, reflecting the glory of God in the world.