The Key Passage (Matthew 5:33-37) – You shall not make false vows, but fulfill your vows to the Lord. LET YOUR STATEMENT BE (present imperative) yes or no, anything beyond that is evil.

Some have understood Jesus’ prohibition of oaths to be universal, but Jesus Himself submitted to oath (Matthew 26:63), and Paul invoked God as his witness in Romans 1:9. God Himself takes an oath so that we might be encouraged (Hebrews 6:17). Jesus is addressing a narrow and misleading legalism that required a specific oath to make spoken words binding. The implication of such an approach to honesty is that we do not need to be truthful except under oath. Jesus demands an integrity of speech as though everything were under oath. He also prohibited the implicit idolatry of swearing by anything less than God.

The Mosaic Law contained several prohibitions against swearing falsely by the name of God (Leviticus 19:12; Numbers 30:2; Deuteronomy 23:21). To swear by God’s Name meant that He was your witness that you were telling the truth. The Jews sought to avoid the impropriety of swearing falsely by God’s Name by substituting heaven, earth, Jerusalem, or their head as that by which they swore.

For the Christian, an oath is unnecessary. His Yes should mean Yes, and his No should mean No. To use stronger language is to admit that Satan—the evil one—rules our lives. There are no circumstances under which it is proper for a Christian to lie.

This passage also forbids any shading of the truth or deception. However, it does not forbid taking an oath in a court of law. Jesus Himself testified under oath before the High Priest (Matthew 26:63). Paul also used an oath to call God as his witness that what he was writing was true (2 Corinthians 1:23; Galatians 1:20).

The key point in Jesus’ teaching is that a disciple’s word is to be absolutely trustworthy, just as trustworthy as a signed document. Josephus writes of the Essenes, “Any word of theirs has more force than an oath; swearing they avoid, regarding it as worse than perjury” (The NIV Application Commentary, Matthew, pp. 246-247). The Essenes (as a Jewish sect) were less popular than Pharisees and Sadducees, living in cities but gathering in communal life dedicated to asceticism (some groups practiced celibacy), voluntary poverty, and daily immersion. Many separate but related religious groups of that era shared similar mystic, eschatological, messianic, and ascetic beliefs. Paul invoked an oath (2 Corinthians 1:18, 23) when people did not know him well.

1. Are you good at making realistic commitments?

2. How can Proverbs 20:25 help us make realistic commitments?

3. What is the difference between lifelong commitments and limited time commitments?

5. Is backing out of commitments been a pattern in your life?

6. What are some enemies of commitments?

9. What was wrong with the rabbinical tradition that Jesus mentioned in Matthew 5:33?

10. What are some of the hypocritical oaths that the Pharisees used to give the impression they were making a commitment that could be trusted? (Matthew 5:34-36, 23:16-22)

13. What does Jesus command us to continually do in Matthew 5:37?

There are two words that are interconnected in Scripture: a vow (swearing an oath) and cursing. The word vow is primarily equivalent to being a fence, an enclosure, that which restrains a person, hence a promise. The idea is that when someone makes a promise, he fences himself in or locks himself in to keep his word.

The swearing of an oath is an appeal to God (or to something held sacred) to support the truthfulness of the statement, a promise or vow in order to remove any shadow of doubt. Hebrews 6:16 says, “For men swear by one greater than themselves, and with them an oath given as confirmation is an end of every dispute.” So most vows involved a curse that a man would place on himself if his words were not true or his promises were not fulfilled (Numbers 5:21, Mark 14:71, Matthew 26:74, Acts 23:21).

A vow is not to be made rashly, so don’t make commitments impulsively, emotionally, or with insufficient information (Proverbs 20:25, Ecclesiastes 5:2-5).

Fathers and husbands can release their daughters and wives from limited-time commitments (Numbers 30:3-16).

Periodic reevaluation is not only desirable, but also imperative. Don’t make commitments lightly, since breaking a commitment can be painful and embarrassing, and sometimes not a biblical option. The Psalmist teaches that a person who will dwell on God’s holy hill despises a reprobate, honors those who fear the Lord, and swears to his own hurt and does not change (Psalm 15:4).

It is important that leaders speak the truth and guard their heart from deception. Jesus says, from within and out of the heart of man, proceed evil thoughts, fornications, thefts, murders, adulteries, deeds of coveting and wickedness, as well as deceit, sensuality, envy, slander, pride, and foolishness (Mark 7:21-22, John 8:44).

False vows are promises that are made with no intention of fulfilling them.

The primary problem was a miss placed emphasis. It’s limited honest Bowers to the Lord, to vows made directly to him or in his name. The keeping of those valves was mandatory, whereas keeping other valves was made optional. Leviticus 19:12 was conveniently interpreted to mean that swearing falsely by any other name was allowed.

Complete honesty should be typical of the kingdom citizen, so that no oath is necessary to guarantee trustworthiness for one’s “yes” or “no.” The law regarding oaths was based upon the third Commandment. False testimony resulted in severe consequences, since it consisted of taking God’s name in vain (Exodus 20:7; Leviticus 19:11-12; Numbers 30:2; Deuteronomy 19:16–20). The rabbis taught that oaths which omitted God’s name could be broken and were not binding. Jesus maintains that God is involved in heaven, earth, Jerusalem, and all things. Hence, all oaths are binding, and any attempt to avoid an oath while pretending to keep it profanes the divine name. The reference is neither to taking oaths in court nor to profanity. 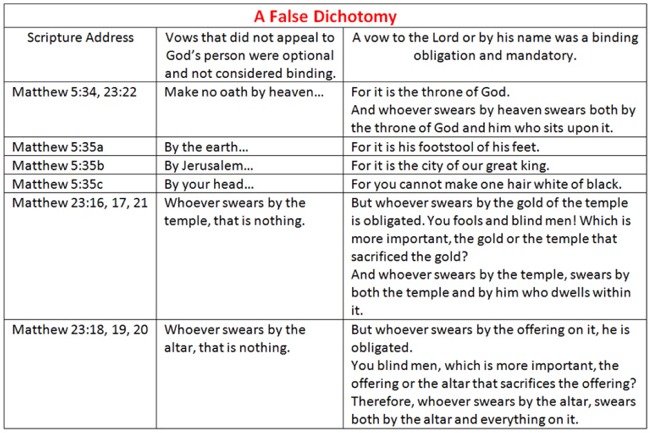 This chart is by my friend Rick.

Jewish tradition held that oaths using God’s name were binding, whereas those avoiding God’s name were not. Jesus now teaches that any such practice is misguided, because God is necessarily involved in all transactions—heaven is his throne, earth is his footstool, Jerusalem is his city, and even the color of a person’s hair is beyond human control (Barclay, vol. 1, pp. 159–60). What the followers of Christ are to do is simply answer Yes or No and stand by their word. To be under the rule of God (that is, in his kingdom) is to be absolutely trustworthy and transparently honest. To depart from this is to fall under the influence of the evil one.

William Berkeley writes, “Here is a great eternal truth. Life cannot be divided into compartments in some of which God is involved and in others of which he is not. There cannot be one type of language in the church and another kind of language in the shipyard or the factory for the office. There cannot be one kind of conduct in the church and another kind of conduct in the business world. The fact is that God does not need to be invited into certain departments of life and kept out of others. He is everywhere, all through life and in every activity of life. He hears not only the words which are spoken in his name, he hears all words, and there cannot be any such thing as a form of word which evades bringing God into a transaction. We will regard all promises as sacred if we remember that all promises are made in the presence of God.” (Barclay, TDSB, vol. 1, p.160).

The rabbinical teaching of the past (Matthew 5:33) had misinterpreted Scripture (Leviticus 19:12, Numbers 30:2, Deuteronomy 23:21:23) and a dichotomy was created. The word dichotomy is from the Greek word meaning “to cut in two.” It refers to dividing into two parts, or two mutually exclusive groups or sections. Things that were closely tied to the religious and spiritual life had to reflect the character of God, but their deals in the secular marketplace were done by a different set of rules. Jesus’ profound point is that you cannot separate the two. Everything we do is spiritual and connected to God. Jesus in emphatically dismisses the notion that some areas of life are unrelated to God.

Jesus condemned the Jewish leaders for making these hairsplitting distinctions between binding and non binding oaths. Matthew 23:16. James 5:12 does not rule out taking an oath of every kind. “Other” oaths means of the same kind (allon). If James wanted to prohibit every kind of oath, he would have used a different Greek word, meaning “another of a different kind” (heteron).

3. Say yes or no when asked to make a commitment. Matthew 5:37. Jesus commanded his disciples to let your statements be yes yes or no no. Some words have double meaning and some words can be interpreted into different ways, but there is only one possible way of interpreting yes.

Jesus is not prohibiting a Christian from being put under oath in a court room, Genesis 14:22-23, Matthew 26:63-64, but it should be unnecessary if the words of Christ were obeyed. Clement of Alexandria held that a Christian should “maintain a life calculated to inspire confidence toward those without, so that an oath may not even be asked.”

In order to accommodate the week fate of man, God would swear by himself when making a promise, Genesis 22:16 Jeremiah 22:5, Amos 4:2, Amos 6:8. Since his promise already was unbreakable, his pledge did not make his promise any more secure, but he nonetheless gave it as further assurance to those who are slow to believe.

Jesus even allowed himself to be put under an oath, Matthew 26:63-64. The High Priest’s phrase, “I adjure you by the living God,” is literally in the Greek, “I put you under oath by the living God.” This was when he was being tried before the Pharisees. Although Jesus was willing to swear an old his words are always trustworthy. His words are a reflection of his character (Titus 1:2, Numbers 23:19).

And second Corinthians 1, Paul concludes that one should not vacillate and wander in and out of commitments every time circumstances change or the pressure gets too great. Paul says to vacillate in a commitment is an active carnality. Paul here points out that he postponed his trip because he wanted to give the Corinthian’s time to repent but he would eventually show up as promised. Paul assured the Corinthian’s that his promise to come was as trustworthy as the message that he preached (2 Corinthians 1:15-22).

4. Recognized the hierarchy of commitments before saying yes or no.

Lifelong Commitments: lifelong commitment should not be terminated or reduced, only deepened. God takes our vows seriously.

Lifelong commitment must be for you, and very significant, and deeply rooted in Scripture. These commitments TO BE are issues of mind and heart that result in deep character traits. For instance: being a faithful spouse, parent, and employee; being a person of integrity and personal holiness.

These lifelong commitments are not necessarily time consumers, but should form the very fiber of your life, the way you think and live. How they are translated into specific activities it’s more under limited time commitments.

Now comes the crucial question. How does one practically make lifelong commitment? I have found four predominant settings in which a deep commitment tend to be made:

Note the absence of church services or single meetings. They often are too short to focus on deep commitment. Certainly decisions are made in such meetings, but they generally result from a third setting, a personal crisis.

Finally, short-term activity commitments must be realistic and reasonable: Two hours a day in prayer, 10 hours so we can Bible study, or four group meeting room per week maybe commendable, but unrealistic for any length of time. It’s better to make more reasonable, attainable goals and exceed them than to set a pattern of burden some commitments.